Twenty years after the founding of the first “Rotary” club in Chicago, Rotary came to Chino as the community’s first service club.

The Pomona Rotary club had been active five years and wanted to sponsor its third club in Chino. Organizational meetings were held during December of 1924 and January 1925. The Chino club was chartered at a dinner February 6, 1925 at the Valley Club in Pomona.

In the original group were 19 men. The first president was Robert Condee, director of the agricultural program at Boys Republic. Gordon A. Whipple was the first secretary, treasurer was Al Tolle and sergeant at arms Frank Mogle.

School superintendent B. McCall Aldridge was the second president and also a chief organizer.

The first meetings were held at Odd Fellows Hall at Seventh and D streets.

Those first years were ones with a steady growth of membership and a good attendance percentage. Usually the attendance was in the high nineties. A Rotary Anns group was formed by wives.

The Chino club has always been interested in education and recognition of academic achievement. The first scholarship loan was made in October 1925 to a Pomona College student. The first Crombie Allen Award was made at Boys Republic in 1928. Many projects in boys work were in the activities of the club and many students have been brought to Rotary meetings as guests.

The club began meeting at the newly built Chino Community Building in 1940 at Wednesday noon, the same place and time that it meets now. For many years lunch was served family style by groups of local women. It is now catered buffet style.

Chino Rotary was among the first Rotary Clubs to admit women members in the early 1990s.

It was sponsor of a second club in Chino, El Rancho del Chino morning club.

The club established the Charitable Foundation of the Chino Rotary Club in 2001 for its contributions to civic and charitable organizations and grants for educational and civic improvement.

The club makes contributions to Rotary International’s Rotary Foundation which sponsors worldwide projects, which have included participation in the PolioPlus program seeking the elimination of polio. Individual members who have major contributions to the RI foundation are designated Paul Harris Fellows.

The Chino Rotary Club has furnished three district governors, Levi Dickey in 1961, Jim Bruno in 1969 and Gene Hernandez in 2008.

Our Club in the Community

“Service Above Self” is Rotary’s guiding light, together with its Four Way Test for business ethics. Rotarians are motivated by a desire to give back to their community as well as to uphold high standards in their business relationships.

As the oldest service club in the community, Chino Rotary has a long history of involvement and financial support for local programs particularly supporting young people, their physical and organizational activities and their school achievement.

Much of its charitable budget, administered by the Foundation of the Chino Rotary Club, is raised by an annual dinner and auction. Other funds, such as international projects, come from wine tasting parties and other events.

Physical projects of benefit to the community have been the flag poles presented at the opening of the Chino Civic Center, Centennial Square at Central and Washington Avenues, picnic tables at the Yorba-Slaughter Adobe, the clock on the city-Chaffey College tech building downtown and replacement trees at Chino High.

Numerous mini-grants have been provided to classroom teachers. The club supports community assistance agencies such as Neighborhood House and Isaiah’s Rock, and needy family services. Internationally, it has provided wheelchairs and helped with clean water projects, livestock for impoverished farmers, scholarships for girls in third world countries and homes for poor families in Mexico.

Today the Rotary Club of Chino has over 25 members. We meet consistent with our online calendar which can be found here - https://chinorotary.org/calendar/

Every year we host our Chino Vally Lobsterfest, our biggest event of the year.

Also, in the summer the Chino Rotary Club partners up with other local charities for fun and sport at the Southern California Charity Golf Classic.

With everything we're doing, it has never been a better time to join Rotary.

Al McCombs has been a member of Rotary since January, 1957, and at age 90 is the oldest member of the club. He is publisher emeritus of the Chino Champion, having owned the paper for 60 years before selling it in 2016. He is a past president of the club and has been active in numerous Chino civic activities. 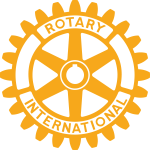